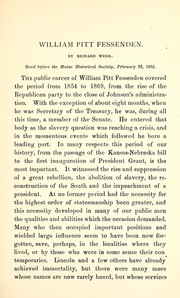 Published 1899 by [Maine Historical Society] in Portland, Me.] .
Written in English